Foreword: You may laugh at me. You may kick me. You may throw stones at me, because I have realized that it has been at least 5 months since I’ve started this blog, and I have completely forgotten to post a review for my all-time favorite game: Mashiroiro Symphony.

Me, as I realized this fatal mistake.

Nonetheless, I will take in extra effort and time for this review, because I have titled this game: Ultimate Pinnacle of Visual Novels. Readers will see there is a reason why I present this game with such a title.

Other players in the Western areas like Aaeru will agree with me on this context. Please enjoy this humble review of Mashiroiro Symphony! ^^

Summary: The story begins with a girl, Uryuu Sakuno, getting lost after coming home from shopping. Her older brother, Uryuu Shingo, then must go out to find her. However, the two continuously cross each other’s paths, and Sakuno’s cellphone finally runs out of battery. Fortunately for Sakuno, a girl comes by and helps her find Shingo. After learning her name, Sena Airi, the siblings finally return home. Next day, the siblings prepare to attend a different school than normal. This is because both Shingo and Sakuno are the students who were selected to participate in a “test” convergence in the Yuihime Girl’s Academy. While Sakuno is a female who may have not too much difficulty merging with the class, Shingo is nervous to whether or not he would be able to get along with girls who have never had experience with males.

Shingo will soon realize, however, that even with the convergence of the Test Class, one of the students is strictly opposed to the convergence: Sena Airi! It also happens that Airi is the daughter of the School Headmaster, and is the #1 student in the school. With her disapproval, Shingo and the male students realize they’re not welcomed by other female students as well.

This is one of the moments when the reader is explicitly told the “good parts” of Shingo, through Anje, who follows him.

Story Length: Moderate (25 hours)
Complete Story Clearing Difficulty: Easy
Comments: If I recall correctly, there are only three choices that needs to be made in the game. Most of the story line is reading the nice designs of the story. 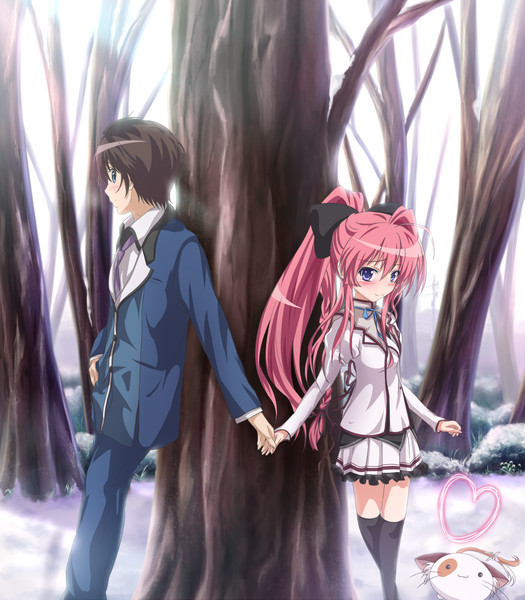 After each release (of the game and anime), Inui Sana actually ended up as #1 in the popularity rankings, despite the fact that she was a subcharacter. Perhaps this was the reason why Mutsu no Hana, (only for PSP) was released, where Sana becomes a main heroine.

Character Design Rating: 10/10
Story Rating: 12/10
Game Quality: High
Overall Rating: 11/10
Rating Comments: Yes, we have a highly superior game, fully deserving of the term “perfect” and even more. The scenario is created masterfully, which allows 99% of the players to agree that Sena Airi’s route is the “Best Example of a Good Story“. Don’t let this discourage you from the other routes, however! The other three characters are all carefully designed; their characters are fully competent and worth your time. Throughout the story, one of the factors that I appreciated most was small animated gif files, that was used as a “special effect”. For some reason, the usage of these special effects was not too fancy, nor was it unnecessary in any sense. This moderate use of “special effects” is a very good trait of Palette, which I deeply admire them for. Another cool effect they used is the zooming of BGs and character sprites. It really helps the readers feel as if they’re a part of the story, which adds into the rating.

Comments: One of the features I appreciate about this game, over most other visual novels, is that the game CLEARLY tells you the “good things” about each character, in one way or another, and even to WHY that trait is so attractive. Why is this important? Because without the above element, there is no reason for these characters to be falling in love! This brings me to my point, that in many other games, the characters falling in love with each other is often implied, rather than being explicitly stated. In addition, the traits that are implied aren’t really that great either! In many harem anime, you may have seen that the heroines say about the protagonist, “Because he is kind”, but what defines “kind”? This game goes through all of it.

Affection for the Characters: Extremely High

Sakuno in her Yuihime School Uniform!

CG Quality: High. Tsubasu-sensei has done it again. Despite having only significant experience in designing characters since Akaneiro from Feng, Tsubasu-sensei’s works have been labeled several times as a “superior bishoujo” artwork. All her characters, while they seem to portray a different personality each time, seem to have a calm aura around them, and her artwork has only been improving, to the point she will be in charge of character design for Palette’s Latest Game: Koisaku.
Music Quality: Very High. Despite having the same atmosphere and theme as its previous works like Moshihare or Sakura Strasse, this game actually arguably had better music, which sounded more “bold” than its ancestors. The clarity and the deep resonance of each piece contradicted somewhat with Mashiroiro Symphony’s overall theme of “pure love”, but it was a nice contradiction: the irregularity was represented mostly with a pop-style music, which is actually rather rare in Visual Novels.

The SDCGs are absolutely adorable as well.

Assault me too, Sakuno-chan~ ^o^

Addictiveness: Very High. So far, I’ve already played this game twice, and going for the third playthrough. I have NEVER played a game any more than twice. This says a thing or two about the quality of the game.

Conclusion: Aaeru considers this a “kamige” (神ゲー) and she does that justifiably; great character design with an even better story design captures the heart of many readers, enough for this game to finally have a group translating it.

Airi and… Who are you?

Spoilers of [130222]Komorebi no Nostalgica