Foreword: ALL ABOARD THE 12TSUKI HYPE-BOAT

Well, I think there’s one… right?
Pretty much what you would expect as you start the story, this game is from (insert trumpet horns here) minori! Yep! The awesome company who wrote up one of the best titles known to the English community: the ef series!

Frankly, their design is amazing. With all the character design and story aside, music is brilliant, clear, and bold. Art is at its highest quality and very detailed, and even the CG count is stunningly high.

minori is flat out one of the best companies when it comes to designing the UI or the systems of games: some of the other companies really need to follow their example.

Now, when it comes to story… maybe the following review might help you understand how I feel. 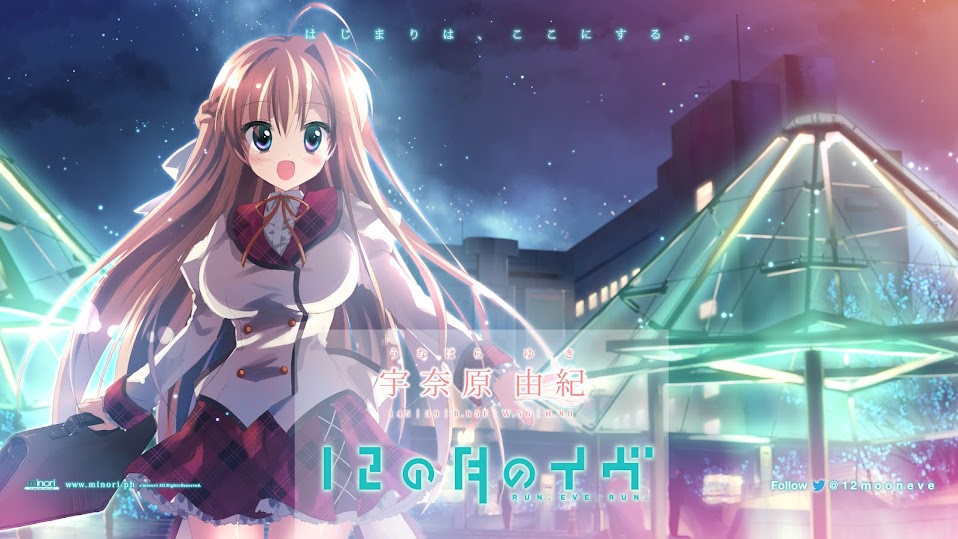 Please Note: The following review may contain unintentional but very mild spoilers! While there is little chance that the story will be spoiled, I warn readers ahead of time for the possible slip-of-the-tongue on my part.

Summary: The story starts with Naoto being order to pick up a cake on Christmas Eve. As he does so, he complains to his childhood friend Anzu about how he doesn’t have any family nor a girlfriend on Christmas. As they end the conversation, Naoto is passed by a girl who he thinks he saw somewhere. As he turns around, he sees the girl glaring at him from a distance, and say one phrase that will stay with him forever: “I’ll see you again, in the future“…

Naoto gets up in the morning and starts to head out. However, on the way, he wonders about the word “destiny”. As he does so, he bumps into his childhood friend Mizuka who falls down due to her lack of physical endurance. This is a normal day for the childhood friend trio, who were together since they can remember.

This group then soon includes Yuki, an energetic transfer student with nothing much known about her.

However, as “destiny” ravels out, Yuki is related to Naoto some way…

Story Length: Moderately Long (25 hours)
Complete Story Clearing Difficulty: N/A (No choices at all)
Comments: A long game with no choices, the game goes through the heroine routes in sequence, but does so masterfully that I’m lost for words. The setting is done very well and believe it or not: these “kinetic novels” are one of my favorite style in visual novels. After all, when you’re reading a book or watching a movie, you’re not choosing which choices to make, right?

Character Design Rating: 6/10
Story Rating: 8/10
Game Quality: Very High
Overall Rating: 7/10
Rating Comments: A good game that unfortunately loses points for small but crucial factors that tie up the story. Overall, the average joe won’t be able to notice these “discrepancies”, but as a critic, I seem to have an eye for detecting them. Nonetheless, a stunningly high quality game with character’s eye blinking and mouth synchronization, as well as special effects in addition to the already high quality and numerous CG was DEFINITELY worth my time.

Character Summary: Let’s go through the characters, in the order they are presented!

First we get to Mizuka, a very lax character shown quickly to have various traits such as having the largest breast size *insert perverted grin here* and also being the oldest of the crew. Despite the age difference between Naoto to be only a few months, Mizuka refers herself as “Naoto’s older sister”, and acts this way as well.

Contrary to her personality of being laid back, Mizuka is extremely intelligent–receiving top grades in her classes. However, her weakness is that her ridiculously low physical endurance limits her to walking to school, and many comical scenes in game show her even fainting at the most basic physical stress (such as running to school when they’re late).

Her intelligence, however, corresponds to her sharpness in detecting changes to the people around her: she quickly notices Anzu’s feelings for Naoto, and uses her own methods to “Keep the 3 together”.

Mizuka’s route has a theme of “memory”.

Next is Anzu, and her name is actually spelled the same way as our half-English, half-Japanese imouto!
From the very beginning, the characters flat out label her as a “tsundere” character, and it becomes obvious for the readers too, so there’s not much confusion in that area.

Anzu is probably the opposite of her older sister, Mizuka: she’s not too great in studies, but very skilled in housework, which is what Mizuka is horrible at. Perhaps because Anzu is so headstrong, she becomes an easy target for Mizuka and Naoto’s sexual or double entendre jokes.

While the theme of “family” is pretty much absent in this game, it’s within Anzu’s route where their family’s history is most greatly explained. While not resolved completely (so Anzu’s route does seem incomplete), Anzu’s route contains many foreshadows for the last route.

As obvious as it is, Anzu route’s theme is “family”

The last and true route involves our cute and energetic transfer student Yuki! She appears in the opening movies and is placed in front of the box cover, so it’s obvious that she’s not JUST a transfer student who randomly gets along with Naoto, Mizuka, and Anzu.

In fact, Yuki’s identity is revealed very early on, and even after Mizuka’s route (which is the first one you encounter), you are shown the fact that Naoto is indeed her biological father and Yuki herself is an identity from the past who is trying to change her future. This becomes the whole theme in the later portion of the game.

Here’s a spoiler I really hate giving out: Yuki tries to change her past by trying to hook up Naoto, who she knows to be her father, with someone else. She actually has a critical and unknown disease which paralyzes her entire body, and if not treated, it immobilizes the heart and she dies. While Yuki does not know what the cause for this is, she and other characters believe it’s a genetic disorder. This is Yuki’s reasoning to hook up Naoto with someone else, which she successfully performs in both Mizuka’s and Anzu’s route.

Well, why does her route exist then? Obviously because she fails to reach her goal in both routes.

The 3rd time around, Yuki falls into despair, because she does not know what to do. As she learns later, the 3rd time-warp is the last one possible, and she needs to get it right this time or else she will die.

Then she falls in love with her own father: Naoto.

Yuki’s route, which has the theme of “Trust” and “Never Giving Up”, is the main part of the story, while Mizuka and Anzu’s routes are probably just present for fan service.

Comments: So we have a relatively superior game… but what’s wrong with it?

Let’s just say that minori’s motto is “We keep minority spirit”, yet they still jumped on the bandwagon for the “balloon chest syndrome”… and as strange as it is, I’m not too much of a fan of disproportionate breasts.
That, and the protagonist isn’t voiced :|

Not gonna lie: my thought first went to “Holy crap those melons look heavy” instead of admiring the CG

That’s just one of the reasons. Another is that when it comes to “falling in love”, there’s really no trigger–especially for Yuki. The other two characters, minori made an implied excuse as that “they were together for so long that they just became to like each other”, but I don’t think Yuki fits the bill, right?

But even so, I’m impressed that minori took upon the “time-warp” theme this time. Frankly, such a theme isn’t really an easy one, and many of the companies screw up because of the time paradox.
Unfortunately, minori was one of them too, but they swept that paradox right under the rug so…. meh (Hey, at least they cover it up. Other guys just leave the contradiction in your face)

This CG of the candles look REALLY creepy for some reason.
The fact that the flames actually move in game makes it even more scary.
This is another plus in this game: very realistic CG that’s also animated!

Then again, it’s minori, one of the best game-creating companies out there, so I guess I was a bit more disappointed.
However, I still need to give them credit for keeping a very strong consistency with the “time-warp” theme, which is usually thrown out the window.

Speaking of which… the two childhood friend’s routes do have conflicts unresolved, and the characters having this kind of a mindset to it:

…which isn’t really a plus if you ask me.

As for the protagonist, I felt like he was a little bland. He doesn’t really stand out, and just has his previous relationship with Mizuka and Anzu that makes him the protagonist of the story.

Whoa, what a mess! Did the calm and relaxed Mizuka do all this?

Affection for the Characters: Moderately High

Conclusion: So I guess the most things that earns the points for this game is the interface, the system, CG, and the music, and maybe the theme if you wanted to be nice. Otherwise, the story and character design was above average at best. I mark this “highly recommended”, but only for the factors I mentioned to be “very good”. Don’t expect a heart-wrenching or a tear-jerking story you might have seen in ef, but it’s still better than most of your charage.

Let’s all curse Naoto for having a bishoujo on his lap, shall we?