but the two look so happy!

Story Length: Very Short (2-3 hours)
Complete Story Clearing Difficulty: Moderately Difficult
Comments: The real difficulty in the story isn’t the puzzles: it’s the horror that pushes your body to its limits. Your heartbeat will be racing, and you’ll need to focus all your attention on this game to keep your sanity and from screaming.

There is a walkthrough on the English page (this is also the walkthrough posted on the main Japanese page as well), but it does not offer when the “Chase Events” occur, and often only gives you hints. 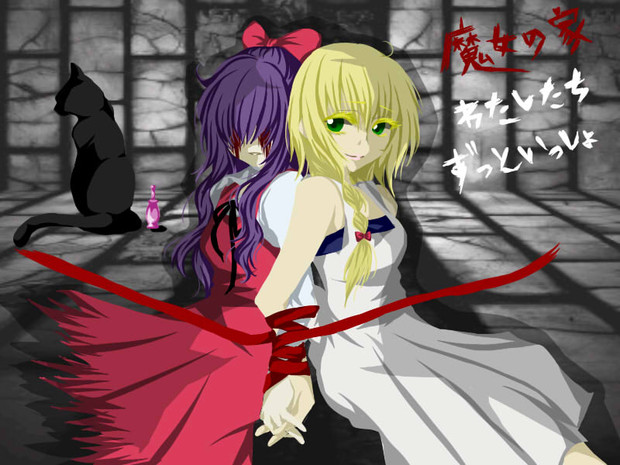 Gameplay
The game mostly involves puzzles, where you must solve a puzzle based on the hints that is given to you in the game, or to you previously. The wrong selections in dialogue or wrong movements will kill Viola, and it’s actually pretty creative on the author’s part to kill her in so many ways possible.

Then sometimes during the story, there’s various “Chase” Scenes. Simply put, a scary pixelated enemy will chase Viola, and if it touches her, she will die. In She must do something in order to stop the chase by either completing an objective before getting caught, or escaping to another room.

Most of the time, these chase scenes are unexpected and will take a reader by surprise. The last mission in this game is a long chase scene, too. Personal Comments
So I started this game out with great hopes, and I was like “Yeah! I’m going to rock this!”

(Note that I was in a lecture when playing this game. While I didn’t shout it, my friend who was sitting beside me heard me and was laughing her behind off)

Okay. I figured out how to get past that trap. Oh, a teddy bear puzzle? Sounds simple enough. I just cut off its limbs (which suddenly turns bloody and is completely not creepy at all) and stuff it in the basket and leave the roo–HOLY SHIT A GIANT TEDDY BEAR JUST FUCKING KILLED ME.

And so, with such events repeating over and over, (I gave up trying to count my deaths after 40) I got to the ending using a few of the hints posted on the Walkthrough, and somehow magically (aka, by luck) obtained the “True End” with one try (although I kept failing the Chase Event when trying to obtain a Normal End)

Story
As with any game I play, this is the main dish.

My attitude towards those comments were:

This story is really depressing. Even when my friend mentioned a “plot twist”, and I correctly predicted that Viola herself is a witch, but I kept wondering what was up with the purple-haired girl throughout the game until the very end, where I was just slapped so hard with the truth that it hurt.

Now, when I think of Viola, my reaction is similar to the following picture:

Honestly, this game left a huge impression. From the literally hundreds of ways to die in this game all combined into two “actual” endings, and with the novel that you read afterwards… Oh man, this really made me sad.

I’d like to announce at this point, that I have played over 200 VNs with characters dying all over the place, but nothing was comparable to this game–it’s just that depressing. In addition to all the shocking events that this game holds, just the methods that Viola gets killed with is strongly engraved in my mind.

In complete and genuine seriousness, I am so glad this game was pixelated, because if it had finer details, I would’ve seriously screamed and shit my pants.

This is really weird, though, since if you remember the Bongcheondong Ghost story, all I reacted was that I flinched a little and that was it. Unlike some of the more funny reaction videos on Youtube, my reaction was more “Oh wow, that’s scary”. It was different in this case… I wonder why?

The Cover Page of the Novel written by Fummi

“Prequel” Novel (Only to be read after finishing the game completely)
http://vgperson.tumblr.com/post/65803385327/the-witchs-house-the-diary-of-ellen-chapter-1-back

The above link is the translated novel by VGPerson.
The Novel itself was written by Fuumi, and involves Ellen (the Witch’s) story before this game takes place.

Despite being the “prequel”, it is highly suggested to read the novel after playing the game, as it also contains various spoilers of the main game as well.

However, the novel is a great supplementary story to the game, and may connect many of the things you wondered about in the main game. Conclusion
So did I like the game? Yes, and no.

I loved the game’s system; I love puzzle games such as this, especially if it’s some sort of an escape game.
So what did I NOT like about it? The Endings.

Both endings are very depressing, with the “True Ending” even more depressing than the first. (Apparently, there’s a 3rd and 4th ending, but upon research, the 3rd ending isn’t that different; it’s only the in-game text that changes a bit, and the 4th ending is pretty anticlimactic.

On the other hand, the game itself is free, so there should be little reason for you to NOT play this…

That is, if you’re willing to enter the Witch’s House for yourself…